Nobel Laureate Edmund Phelps has long argued that the high level of innovation in the lead nations of the West was never a result of scientific discoveries plus entrepreneurship, as Schumpeter thought. Rather, modern values—particularly the individualism, vitalism, and self-expression prevailing among the people—fueled the dynamism needed for widespread, indigenous innovation. Yet finding links between nations’ values and their dynamism was a daunting task. Now, in Dynamism, Phelps and a trio of coauthors take it on.

Phelps, Raicho Bojilov, Hian Teck Hoon, and Gylfi Zoega find evidence that differences in nations’ values matter—and quite a lot. It is no accident that the most innovative countries in the West were rich in values fueling dynamism. Nor is it an accident that economic dynamism in the United States, Britain, and France has suffered as state-centered and communitarian values have moved to the fore.

Read a Columbia News interview with Edmund Phelps about Dynamism. 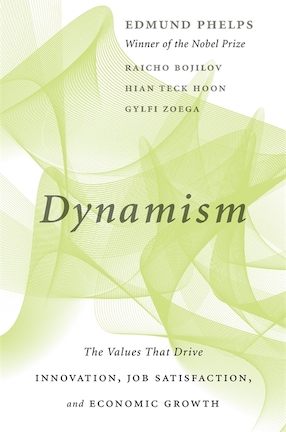 Economics
Back to Top