The future of fiction is neither global nor national. Instead, Matthew Hart argues, it is trending extraterritorial. Extraterritorial spaces fall outside of national borders but enhance state power. They cut across geography and history but do not point the way to a borderless new world. They range from the United Nations headquarters and international waters to CIA black sites and the departure zones at international airports. The political geography of the present, Hart shows, has come to resemble a patchwork of such spaces.

Hart reveals extraterritoriality’s centrality to twenty-first-century art and fiction. He shows how extraterritorial fictions expose the way states construct “global” space in their own interests. Extraterritorial novels teach us not to mistake cracks or gradations in political geography for a crisis of the state. Hart demonstrates how the unstable character of many twenty-first-century aesthetic forms can be traced to the increasingly extraterritorial nature of contemporary political geography. Discussing writers such as Margaret Atwood, J. G. Ballard, Amitav Ghosh, Chang-rae Lee, Hilary Mantel, and China Miéville, as well as artists like Hito Steyerl and Mark Wallinger, Hart combines lively critical readings of contemporary novels with historical and theoretical discussions about sovereignty, globalization, cosmopolitanism, and postcolonialism. Extraterritorial presents a new theory of literature that explains what happens when dreams of an open, connected world confront the reality of mobile, elastic, and tenacious borders.

Read a Columbia News interview with Professor Hart about Extraterritorial. 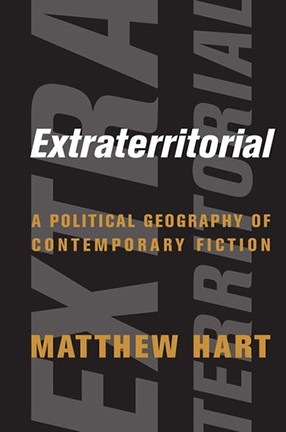