The Insider: A Life of Virginia C. Gildersleeve

Virginia C. Gildersleeve was the most influential dean of Barnard College, which she led from 1911 to 1947. An organizer of the Seven College Conference, or “Seven Sisters,” she defended women's intellectual abilities and the value of the liberal arts. She also amassed a strong set of foreign policy credentials and, at the peak of her prominence in 1945, served as the sole woman member of the U.S. delegation to the drafting of the United Nations Charter. But her accomplishments are undercut by other factors: she had a reputation for bias against Jewish applicants for admission to Barnard and early in the 1930s voiced an indulgent view of the Nazi regime.

In this biography, historian Nancy Woloch explores Gildersleeve’s complicated career in academia and public life. At once a privileged insider, prone to elitism and insularity, and a perpetual outsider to the sexist establishment in whose ranks she sought to ascend, Gildersleeve stands out as richly contradictory. The book examines her initiatives in higher education, her savvy administration, her strategies for gaining influence in academic life, the ways that she acquired and deployed expertise, and her drive to take part in the world of foreign affairs. Woloch draws out her ambivalent stance in the women’s movement, concerned with women’s status but opposed to demands for equal rights. Tracing resonant themes of ambition, competition, and rivalry, The Insider masterfully weaves Gildersleeve’s life into the histories of education, international relations, and feminism.

Read a Columbia News interview with Nancy Woloch about The Insider. 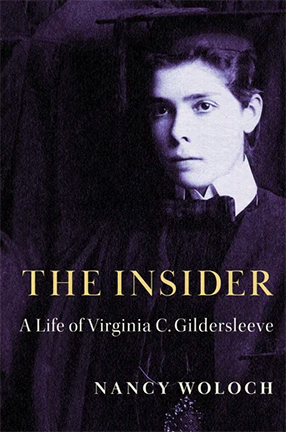