Tirades against legal theatrics are nearly as old as law itself, and yet so is the age-old claim that law must not merely be done: it must be "seen to be done." Law as Performance traces the history of legal performance and spectatorship through the early modern period. Viewing law as the product not merely of edicts or doctrines but of expressive action, it investigates the performances that literally created law: in civic arenas, courtrooms, judges' chambers, marketplaces, scaffolds, and streets. It examines the legal codes, learned treatises, trial reports, lawyers' manuals, execution narratives, rhetoric books, images (and more) that confronted these performances, praising their virtues or denouncing their evils. In so doing, it recovers a long, rich, and largely overlooked tradition of jurisprudential thought about law as a performance practice. This tradition not only generated an elaborate poetics and politics of legal performance. It provided western jurisprudence with a set of constitutive norms that, in working to distinguish law from theatrics, defined the very nature of law. In the crucial opposition between law and theatre, law stood for cool deliberation, by-the-book rules, and sovereign discipline. Theatre stood for deceptive artifice, entertainment, histrionics, melodrama. And yet legal performance, even at its most theatrical, also appeared fundamental to law's realization: a central mechanism for shaping legal subjects, key to persuasion, essential to deterrence, indispensable to law's power, —as it still does today.

Read a Columbia News interview with Professor Peters about Law as Performance. 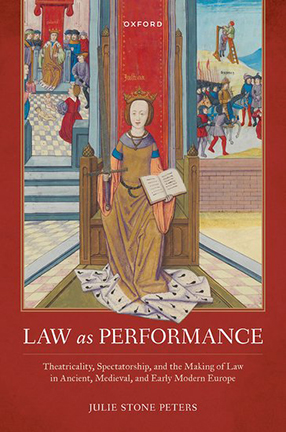