National Security, Leaks and Freedom of the Press: The Pentagon Papers Fifty Years On

The Legacy of the Pentagon Papers

Two of America’s preeminent First Amendment scholars, Columbia University President Lee C. Bollinger and University of Chicago Law Professor Geoffrey R. Stone, have brought together experts across a wide array of fields to examine the legacy of the Supreme Court’s landmark 1971 decision in the Pentagon Papers on the occasion of its 50th anniversary.

National Security, Leaks and Freedom of the Press: The Pentagon Papers Fifty Years On offers a collection of essays from leading national security officials, journalists, and scholars, including John Brennan, Eric Holder, Cass R. Sunstein, and Michael Morell. They reflect on the balance between the government’s legitimate need to conduct operations—particularly those related to national security—in secret and the public’s right and responsibility to know what the government is doing.

The issues of leaks and secrecy have continued to dominate the news in the wake of the Edward Snowden and Chelsea Manning cases, raising important, and often unresolved, questions about who has First Amendment rights to disclose, obtain, or publish classified information relating to the national security of the United States.

The Mixed Legacy of the Pentagon Papers: Secrets, Leaks and Prosecutions. The Washington Post. June 18, 2021.

A First Amendment Case That Made an ‘Incoherent State of the Law.’ The Pentagon Papers decision, hailed as a flat-out free-speech victory, in reality had a more complicated effect. The New York Times. June 9, 2021.

The Columbia Guide to the Pentagon Papers Case. Fifty years later, alumni and faculty tell us why the Supreme Court battle matters more than ever. Columbia Magazine. Spring/Summer 2021.

Bollinger and Stone spoke about their book on a LawFare Podcast with host Jack Goldsmith, April 20, 2021.

President Bollinger is one of the nation’s foremost First Amendment scholars. In addition to National Security, Leaks and Freedom of the Press, he is the author or co-editor of numerous books on freedom of speech and press, including Regardless of Frontiers: Global Freedom of Expression in a Troubled World (2021) with Agnès Callamard, The Free Speech Century (2018) with Geoffrey R. Stone, and Uninhibited, Robust, and Wide-Open: A Free Press for a New Century (2010).

Bollinger is a member of the Pulitzer Prize Board and a co-founder of the Knight First Amendment Institute at Columbia University, a center devoted to defending speech and press freedoms in the digital age through litigation, scholarship, and public education. In 2014, he established Columbia Global Freedom of Expression, a project that brings together experts and activists with faculty and students to advance understanding of international norms that protect expression and the free flow of information. 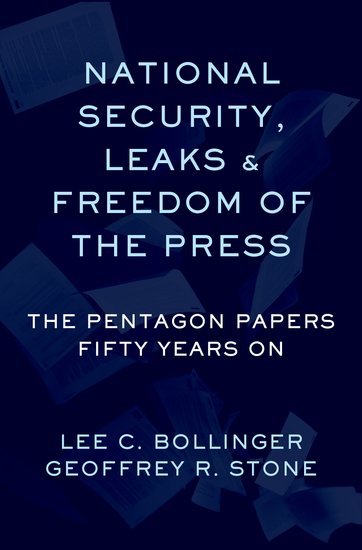 Regardless of Frontiers: Global Freedom of Expression in a Troubled World
Columbia University Press (2021)

Images of a Free Press
The University of Chicago Press (1991)

Journalism
Politics
Back to Top