Scenes of Subjection: Terror, Slavery, and Self-Making in Nineteenth-Century America

Saidiya Hartman has been praised as “one of our most brilliant contemporary thinkers” (Claudia Rankine, New York Times Book Review) and “a lodestar for a generation of students and, increasingly, for politically engaged people outside the academy” (Alexis Okeowo, The New Yorker). In Scenes of Subjection—Hartman’s first book, now revised and expanded—her singular talents and analytical framework turn away from the “terrible spectacle” and toward the forms of routine terror and quotidian violence characteristic of slavery, illuminating the intertwining of injury, subjugation, and selfhood even in abolitionist depictions of enslavement. By attending to the withheld and overlooked at the margins of the historical archive, Hartman radically reshapes our understanding of history, in a work as resonant today as it was on first publication, now for a new generation of readers.

This 25th anniversary edition features a new preface by the author, a foreword by Keeanga-Yamahtta Taylor, an afterword by Marisa J. Fuentes and Sarah Haley, notations with Cameron Rowland, and compositions by Torkwase Dyson.

Read a Columbia News interview with Professor Hartman about Scenes of Subjection. 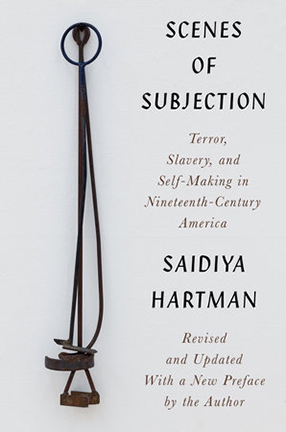