Social Media, Freedom of Speech, and the Future of our Democracy

The Future of Free Speech in the Social Media Era

One of the most fiercely debated issues of the current era is what to do about "bad" speech on the internet, particularly on social media platforms such as Facebook and Twitter. Problematic language, including hate speech, disinformation, and propaganda have been around throughout human history. But, in recent decades, they have been amplified, and, most would agree, fundamentally transformed by the advent of the internet and the rise of social media.

Remedies for these kinds of problematic language are uncertain. In the United States, they are complicated by the extraordinary protections afforded to speech by the First Amendment. It is a foundational assumption of modern First Amendment law that the best remedy for harmful, false, or misleading speech is more speech. Does that still hold true in the age of social media?

In Social Media, Free Speech, and the Future of Democracy, two of the nation's most distinguished First Amendment scholars, Columbia University President Lee C. Bollinger and University of Chicago Law Professor Geoffrey R. Stone, have brought together experts from a variety of disciplines to explore the complexities of this problem. They include Jack Balkin, Emily Bazelon, Hillary Clinton, Jamal Greene, Amy Klobuchar, Newt Minow, Cass Sunstein, Sheldon Whitehouse, and others. Their essays ask probing and thoughtful questions about the future of free speech as we look ahead to the future.

"Every now and then in the history of the First Amendment an issue comes along that not only poses a perplexing and challenging question about some aspect of First Amendment doctrine or some incremental move, but also calls into question the whole edifice of freedom of speech and press as we have come to know it in the United States."

Why regulating “bad speech” online is one of society’s biggest conundrums. The Big Think. August 8, 2022.

New Book Explores the Spread and Hazards of "Bad Speech" on the Internet and its Risks to Democracy. ABA Journal. June 1, 2022.

President Bollinger is one of the nation’s foremost First Amendment scholars. In addition to Social Media, Freedom of Speech, and the Future of our Democracy, he is the author or co-editor of numerous books on freedom of speech and press, including National Security, Leaks and Freedom of the Press: The Pentagon Papers Fifty Years On, Regardless of Frontiers: Global Freedom of Expression in a Troubled World (2021), The Free Speech Century (2018), and Uninhibited, Robust, and Wide-Open: A Free Press for a New Century (2010).

Bollinger is a member of the Pulitzer Prize Board and a co-founder of the Knight First Amendment Institute at Columbia University, a center devoted to defending speech and press freedoms in the digital age through litigation, scholarship, and public education. In 2014, he established Columbia Global Freedom of Expression, a project that brings together experts and activists with faculty and students to advance understanding of international norms that protect expression and the free flow of information. 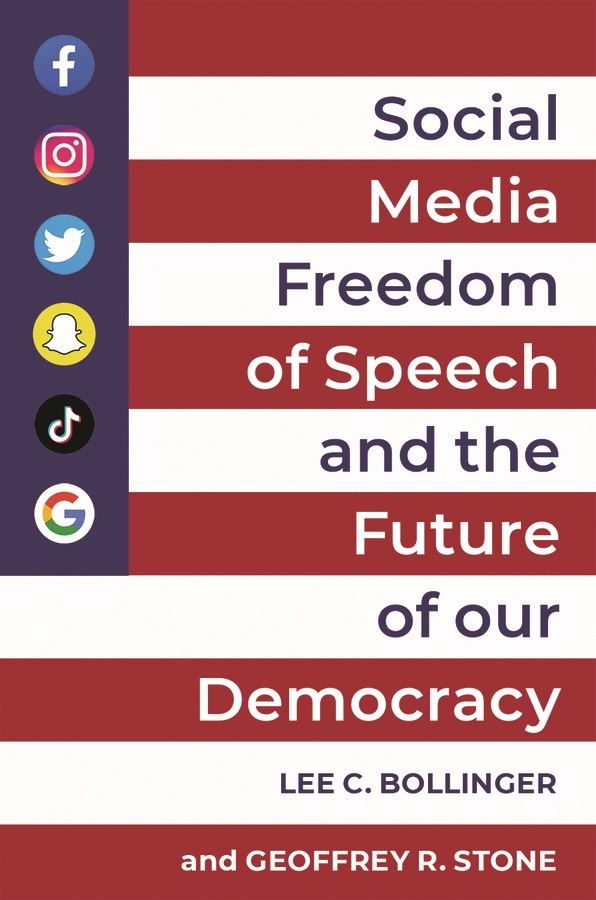 Social Media, Freedom of Speech, and the Future of our Democracy
Oxford University Press (2022)

Regardless of Frontiers: Global Freedom of Expression in a Troubled World
Columbia University Press (2021)

Images of a Free Press
The University of Chicago Press (1991)

Journalism
Politics
Back to Top