The Way Out: How to Overcome Toxic Polarization

The partisan divide in the United States has widened to a chasm. Legislators vote along party lines and rarely cross the aisle. Political polarization is personal, too—and it is making us miserable. Surveys show that Americans have become more fearful and hateful of supporters of the opposing political party and imagine that they hold much more extreme views than they actually do. We have cordoned ourselves off: we prefer to date and marry those with similar opinions and are less willing to spend time with people on the other side. How can we loosen the grip of this toxic polarization and start working on our most pressing problems?

The Way Out offers an escape from this morass. The social psychologist Peter T. Coleman explores how conflict resolution and complexity science provide guidance for dealing with seemingly intractable political differences. Deploying the concept of attractors in dynamical systems, he explains why we are stuck in this rut as well as the unexpected ways that deeply rooted oppositions can and do change. Coleman meticulously details principles and practices for navigating and healing the difficult divides in our homes, workplaces, and communities, blending compelling personal accounts from his years of working on entrenched conflicts with lessons from leading-edge research. The Way Out is a vital and timely guide to breaking free from the cycle of mutual contempt in order to better our lives, relationships, and country.

Read a Columbia News interview with Professor Coleman about The Way Out. 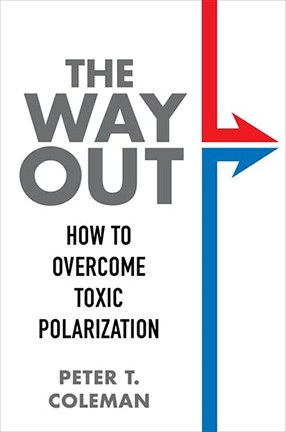 Psychology
Back to Top