Why Chimpanzees Can't Learn Language and Only Humans Can

In the 1970s, the behavioral psychologist Herbert S. Terrace led a remarkable experiment to see if a chimpanzee could be taught to use language. A young ape, named “Nim Chimpsky” in a nod to the linguist whose theories Terrace challenged, was raised by a family in New York and instructed in American Sign Language. Initially, Terrace thought that Nim could create sentences but later discovered that Nim’s teachers inadvertently cued his signing. Terrace concluded that Project Nim failed—not because Nim couldn’t create sentences but because he couldn’t even learn words. Language is a uniquely human quality, and attempting to find it in animals is wishful thinking at best. The failure of Project Nim meant we were no closer to understanding where language comes from.

In this book, Terrace revisits Project Nim to offer a novel view of the origins of human language. In contrast to both Noam Chomsky and his critics, Terrace contends that words, as much as grammar, are the cornerstones of language. Retracing human evolution and developmental psychology, he shows that nonverbal interaction is the foundation of infant language acquisition, leading up to a child’s first words. By placing words and conversation before grammar, we can, for the first time, account for the evolutionary basis of language. Terrace argues that this theory explains Nim’s inability to acquire words and, more broadly, the differences between human and animal communication. Why Chimpanzees Can’t Learn Language and Only Humans Can is a masterful statement of the nature of language and what it means to be human. 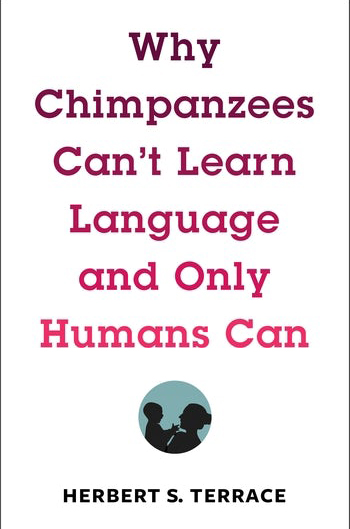 Biological Sciences
Back to Top