Year of the Dog

In the tradition of women as the unsung keepers of history, Deborah Paredez’s second poetry collection tells her story as a Latina daughter of the Vietnam War.

The title refers to the year 1970—the Year of the Metal Dog in the lunar calendar—which was the year of the author’s birth, the year her father prepared to deploy to Vietnam along with many other Mexican-American immigrant soldiers, and a year of tremendous upheaval across the United States. Images from iconic photographs and her father’s snapshots are incorporated, fragmented, scrutinized, and reconstructed throughout the collection as Paredez recalls untold stories from a war that changed her family and the nation.

In poems and lamentations that evoke Hecuba, the mythic figure so consumed by grief over the atrocities of war that she was transformed into a howling dog, and La Llorona, the weeping woman in Mexican folklore who haunts the riverbanks in mourning and threatens to disturb the complicity of those living in the present, Paredez recontextualizes the Vietnam era, from the arrest of Angela Davis to the haunting image of Mary Ann Vecchio at the Kent State Massacre, never forgetting the outcry and outrage that women’s voices have carried across time.

Read a Columbia News interview with Professor Paredez about Year of the Dog. 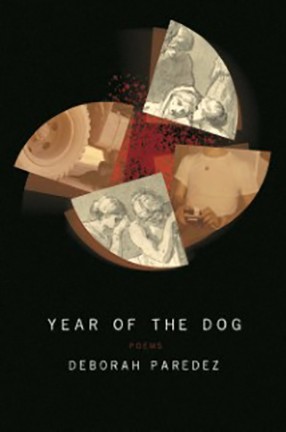