In his almost 20 years at Columbia Libraries, Freddy Claudio (GS’22) was committed to his education, his art, and building community at work. A longtime supervisor of Binding and Shelf Prep (BSP), and good friend to so many in the Libraries, Freddy passed away at the age of 47 on July 15, 2022 from complications related to pancreatic cancer.

On August 25, a community of his colleagues, friends, and loved ones came together in Butler Library to remember him and celebrate his life. Freddy made his intentions for this event clear. He asked that there be food to accommodate everyone, for us to wear bright colored clothes, and to listen to his favorite music. The crowd of about 70 enjoyed Freddy’s favorite rice and beans and other Caribbean recipes, watched a slideshow of pictures of him and his art over the years, and listened to a jazz playlist put together by his friend of 40 years, Richard Caraballo. There was a live musical performance dedicated to Freddy by the Libraries’ own Benjamin Gonzalez-Bierman,  who sang renditions of “Bring Him Home” from Les Miserables (one of Freddy’s favorite Broadway shows) and “Danny Boy.” Ben was accompanied by José Luis Rodriguez, a local harpist.

Listen to the Jubilee for Freddy playlist.
See the photos shared at Columbia Libraries' celebration. (PDF)

Freddy, who worked for the Libraries since September 2003, was responsible for binding materials for all Columbia libraries and doing all the preparation for books and serials prior to shelving. In the Libraries, everyone knew Freddy. He made his rounds on Butler Library's Level 100 every morning and always stopped to greet his colleagues—he saw that as part of the job. Freddy also traveled to all of the libraries on campus to teach librarians how to work with binding software programs, answering their questions, and generally increasing everyone’s knowledge about preservation. Wherever Freddy went, he always brought good cheer.

Prior to coming to Columbia Libraries, he worked for several years at the Strand Bookstore, where he indulged and shared his great love of literature, as many in the Libraries know from his blog post of several years ago, The Comfort of Old Books. Freddy loved reading and was a gifted writer himself. He was also a talented visual artist, who painted and shared his art with colleagues and friends by creating individualized, handmade cards each Christmas or anytime someone might need cheering up. His depictions of birds and other animals were charming and beautiful.

Freddy was a great lover of animals and was predeceased by his dogs Bella and Bailey, and his cat Trixie, whom he saved from the streets and who often made guest appearances on his Zoom calls. He also spent time during his youth working in the Reptile House in the Bronx Zoo and had reptilian tattoos that proved his love for them! Freddy always had a soft spot for the less fortunate, for stray dogs, cats, and people, and had a gift for inclusion, which he exercised both on the job and through his personal interactions. He always practiced kindness and generosity of spirit.

Freddy Claudio at work in Columbia's Butler Library during the pandemic. Photo by Eileen Barroso. 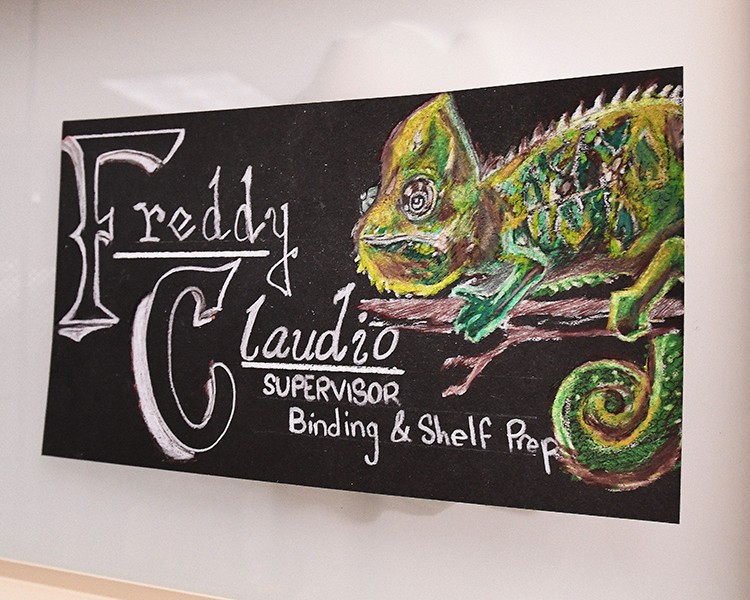 An animal lover, Freddy made several name plates for his teams' desks, starting with himself. We show just a handful in this carousel. Photo by Eileen Barroso. 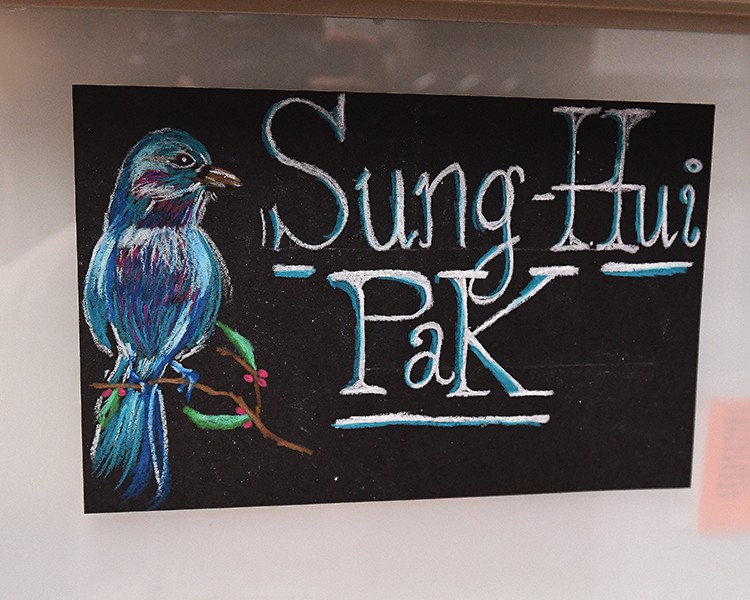 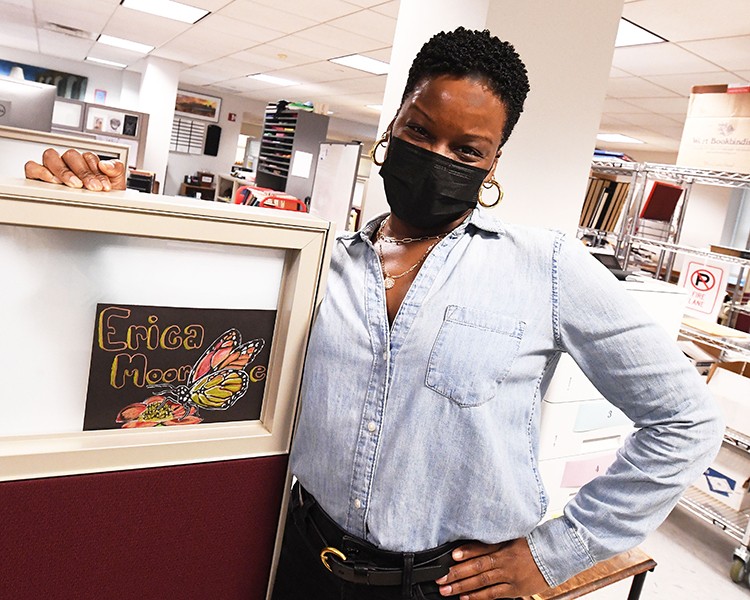 Erica Moor with the butterfly art that Freddy made for her desk. Photo by Eileen Barroso. 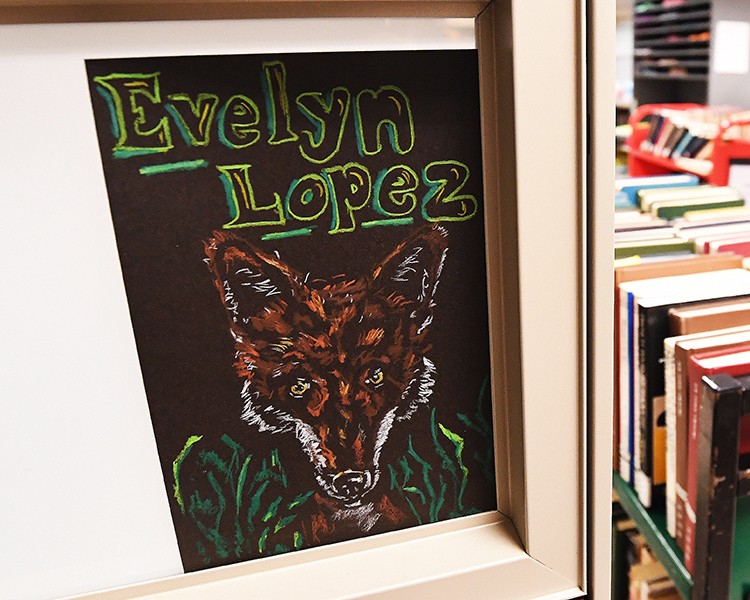 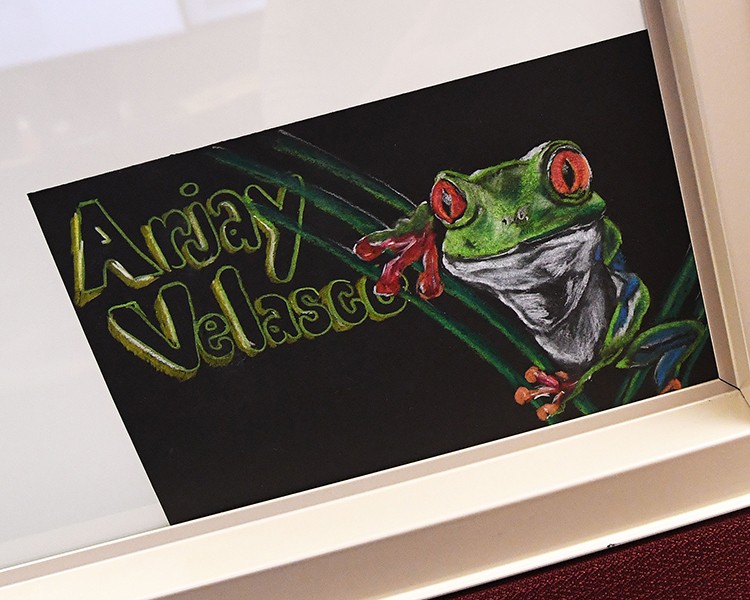 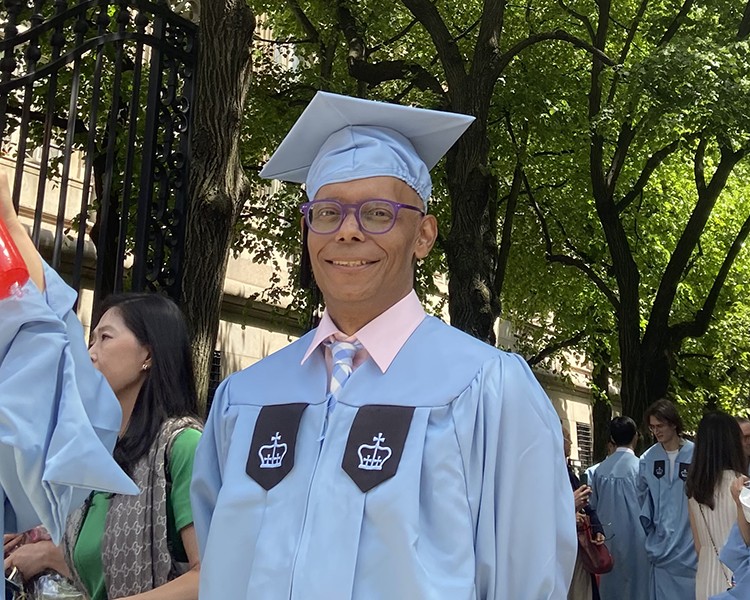 Freddy graduated with a Bachelor of Arts in Philosophy from Columbia General Studies in May 2022. Photo by Benjamin Gonzalez Bierman.

On campus, Freddy was actively involved with, and passionate about, his work on the Inclusion, Diversity, and Equity Committee at the Libraries and was a member of the committee’s reading group. He was also active in the Columbia First-Generation, Low-Income (FLI) Partnership Library, which is a collection of textbooks and other course materials available to low-income and/or first-generation students enrolled in one of Columbia's three undergraduate schools.

He spent many years working toward his own undergraduate degree at Columbia General Studies. After his cancer diagnosis last fall, he realized that he needed to push through and finish. Despite his many struggles this past year, he succeeded in completing a Bachelor of Arts in Philosophy and was on campus to receive his diploma in May. It was a very proud moment for Freddy and everyone who knew and loved him.

Even in the midst of coping with a terminal illness, Freddy was unfailingly kind and generous to everyone he knew, especially to his staff, who were so important to him. He would ask after our elderly family members and look out for after school programs for our children. He treated us all like family, seldom asking for anything in return. His loss will always be felt, but his coworkers and staff were honored to have this opportunity to celebrate him and his many contributions to the Libraries and Columbia.