North Korea has accelerated its weapons-testing program, which includes intercontinental ballistic missiles that have the potential to reach U.S. territory. President Donald Trump has threatened to “totally destroy” the country if it moves against the U.S. or its allies. As Trump began a trip to Asia in November, he said that “the era of strategic patience with North Korea is over.”

At Columbia, experts on Korea say that finding a diplomatic solution to the current standoff is critical. “It’s urgent to move toward a dialogue,” said Charles K. Armstrong, the Korea Foundation Professor of Korean Studies in the Social Sciences. “The military option is not realistic or acceptable. It’s just too dangerous.”

While in Seoul, Trump seemed to moderate his rhetoric, suggesting that he is open to negotiations. “It makes sense for North Korea to come to the table and make a deal,” he said. With three U.S. aircraft carriers and a nuclear submarine positioned nearby, he added, “We have many things happening that we hope—in fact, I’ll go a step further—we hope to God we never have to use.”

Both the U.S. and North Korea have nuclear weapons, and in September North Korea carried out its sixth nuclear test. It isn’t only the U.S. that is concerned: Seoul, the capital of South Korea, is only 25 miles from the border with the North.

A strong U.S. military presence in South Korea, where some 28,000 troops are currently stationed, means that if there were an attack on the South, the U.S. would inevitably be brought in. The countries have been bound together by a mutual defense treaty since 1954, the year after the Korean War ended.

Theodore Hughes, the Korea Foundation Professor of Korean Studies in the Humanities, who lived in South Korea for seven years and visited in June, said that for the first time people in Seoul told him they were worried about the safety of their families. “The risk is there,” he said.

Hughes noted that U.S. Secretary of Defense James Mattis emphasized the need for a diplomatic solution during an October visit to the demilitarized zone that separates the North and the South, while Rear Admiral Michael J. Dumont indicated in a recent Pentagon report that the only way to destroy North Korea’s nuclear arsenal would be through a ground invasion. “Taking these two statements together, I believe the Department of Defense is signaling that war in Korea would be disastrous for all parties involved and diplomacy remains our best option,” Hughes said.

Korea was a single country with a history going back thousands of years, but in the early 20th century it became a Japanese colony. After World War II, it was divided along the 38th parallel by victors in the war, the U.S. and the Soviet Union. North Korea perceived the war with the South that followed as an emancipation struggle to achieve a socialist society, while South Korea considered it an invasion from the North that required help from the U.S., Hughes explained.

“There was a lot of violence, with many deaths and civilian casualties,” Hughes said of the 1950- 53 Korean War. U.S. troops alone suffered nearly 34,000 deaths. “If another conflict were to occur, there would be a massive loss of life on both sides,” said Hughes, who is director of Columbia’s Center for Korean Research. “That hasn’t been thought through by many people in the U.S.”

“The regime in North Korea has been around for 70 years and isn’t going away,” said Armstrong, who has visited the nation five times. “It’s a regime that functions. It works.”

Although information from outside the country is tightly controlled and there’s little or no public criticism of the regime, “it would be dangerous to presume people hate their leadership,” he said. People revere the Kim family, especially Kim Il-sung, grandfather of the current leader, Kim Jong-un. Kim, who came to power in 2011, wants to demonstrate his strength as a leader and preserve the regime, notes Armstrong. He has decided that the best way to do that is to be accepted as a nuclear power, Armstrong added, but he recognizes that launching an unprovoked attack on U.S. territory would lead to retaliation that could destroy his country.

“Trump’s more moderate tone is definitely good news and a great relief to many people in South Korea,” said Armstrong. “Although he didn’t give any specifics, the offer of a ‘brighter path’ for North Korea suggested a peaceful, diplomatic alternative to economic and military pressure for resolving the current standoff.” 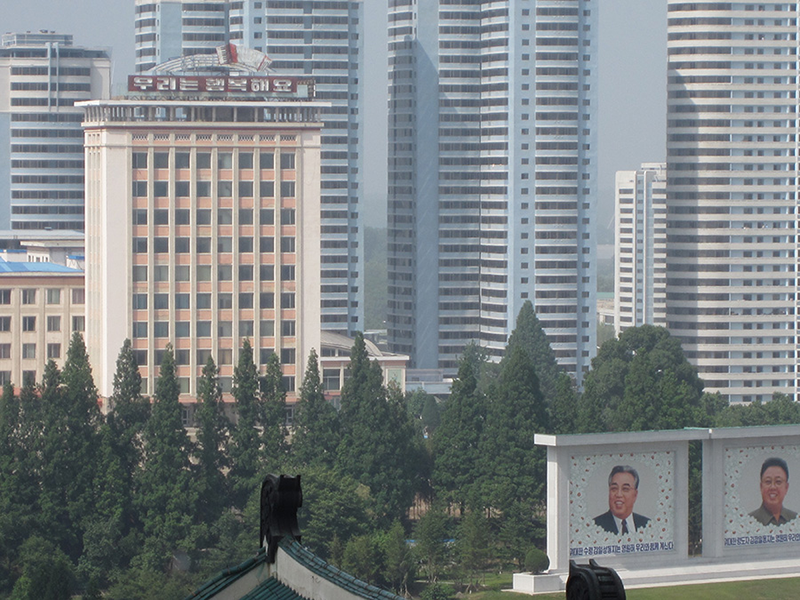 Downtown Pyongyang, with images of Kim Il Sung and Kim Jong-il, the current leader’s grandfather and father. The sign on top of the building reads “We Are Happy.” Photo Courtesy of Charles Armstrong 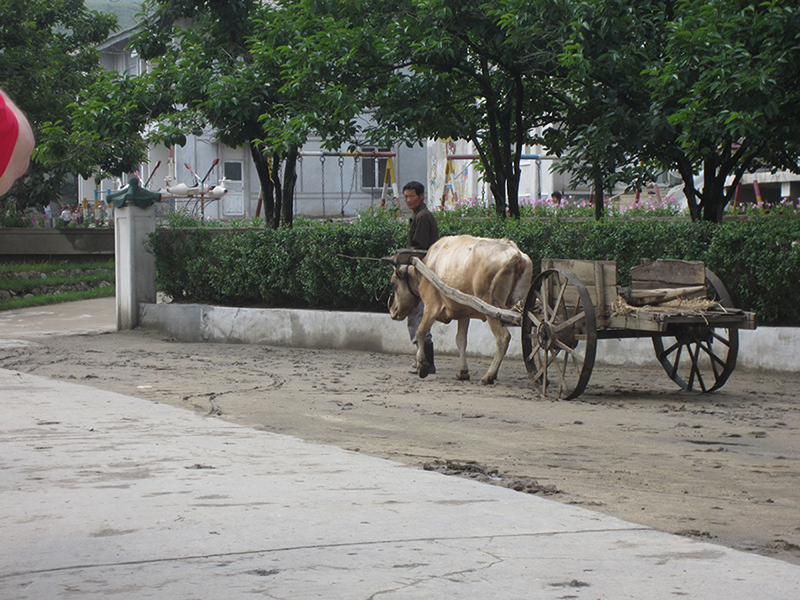 Man with an ox cart. Photo Courtesy of Charles Armstrong 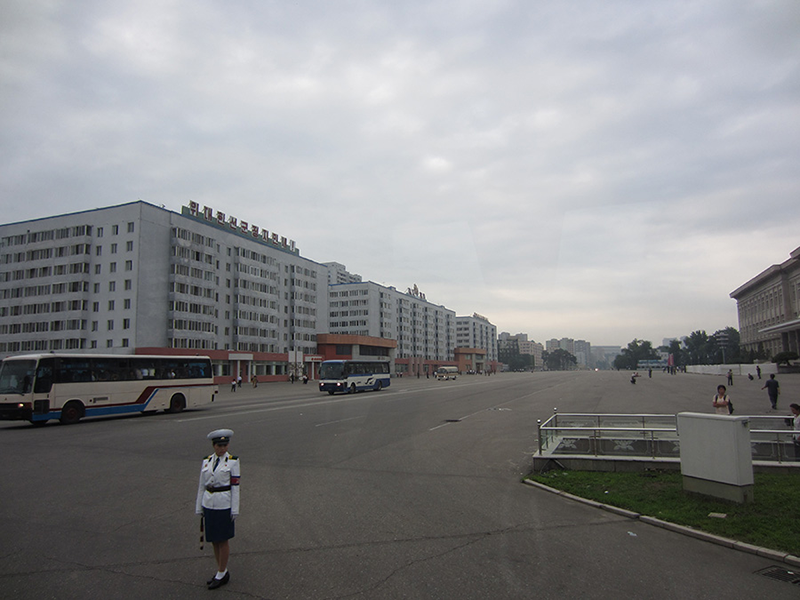 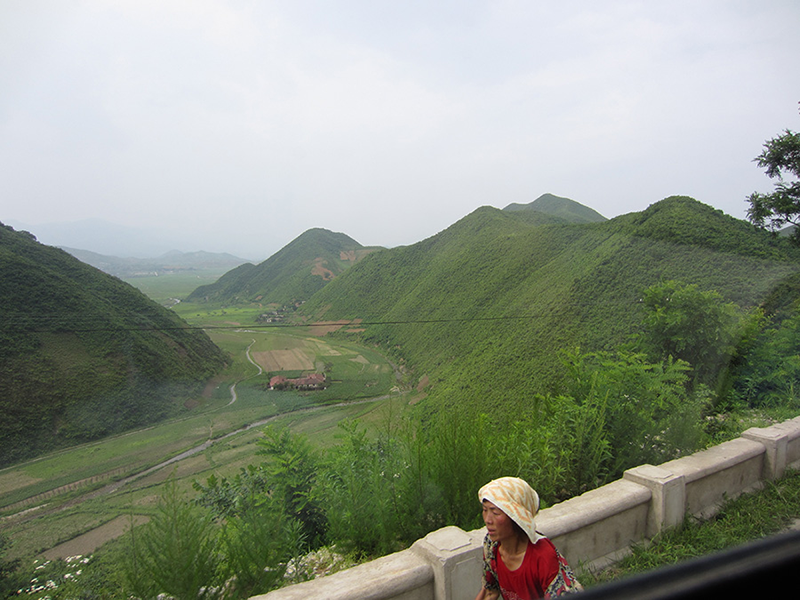 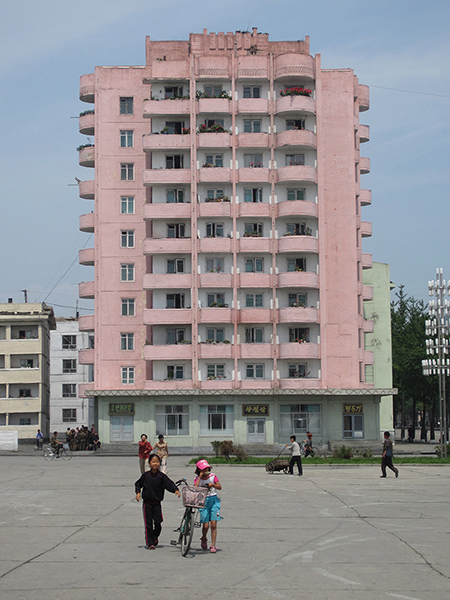 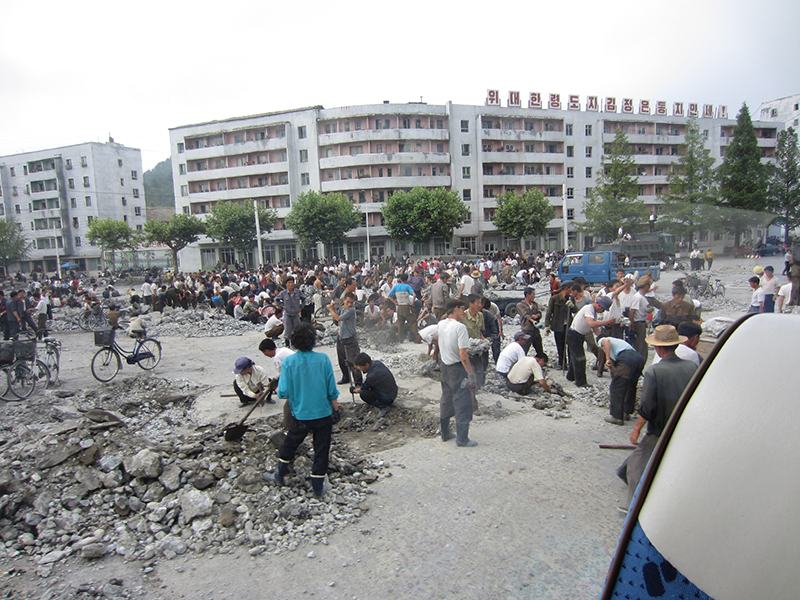